← The Dream Trip
Did someone say zombies? →

The Pope made me wear pants 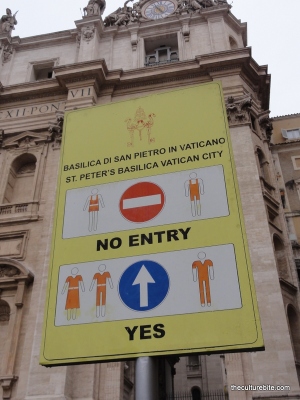 Editor’s note: For those of you who know I recently returned from a trip to Rome, I can neither confirm nor deny that any version of these events actually happened. I can confirm that this story is, in the end, fiction. I wrote this piece specifically with McSweeney’s Internet Tendency in mind, and although it was rejected, the editor did take the time to kindly wish my day be passed in the comfort of shorts.

Original sin is located somewhere in the kneecap. This seems to be the official position of the Vatican. At least, that’s the only logical conclusion I can reach after the Pope made me wear pants. The Pope made me wear pants, which means he’s the one to blame for that pool of purple puke in the hall of the Hotel Primus Roma. Send the cleaning bill to 1 Vatican City c/o Papa Francesco.
Pope Francis may be a reformer, but he’s not taking a sledgehammer to the foundational belief of the Church: discomfort = spiritual okey dokeyness. Why else would I have to wear pants just to enter St. Peter’s Basilica when it’s 90 outside and not even a wisp of a Frenchman’s cigarette smoke in the sapphire sky? Millions of exposed kneecaps in San Pietro’s crib might be akin to Satan and his minions assaulting Heaven’s Gate, but I’ve never been closer to the devil’s door than standing crotch-soaked in ball sweat for two hours under the Roman sun waiting to get in to the home of the Holy See.

I admit, the Pope didn’t force me to wear skinny jeans that were up my ass like Kim Kardashian bikini bottoms, limiting any movement to itty bitty steps like a Japanese maiko in platformed okobo, but I have to think it was the Catholic spirit that drove me to choose corporal mortification by diaper rash.

I can sense your lack of sympathy, but consider the consequences of the Vatican’s medieval modesty. If Il Papa hadn’t made me wear pants, I wouldn’t have broken my wrist because I would have had the crotchal flexibility to clear that fence barricading us from the cool stuff in the Roman Forum. I wouldn’t have been forced to eat at the shady late night spot with the tainted prosciutto because all the reputable places were closed after I got out of the hospital or had two liters of red table wine because it was only €14 instead of the €30 it would have cost at a typical tourist trap. It wouldn’t have mattered that the bathroom window in my room at the discount hotel was stuck open or that the window had no screen or that pterodactyl-sized mosquitos were streaming in through the opening or that I closed the bathroom door to keep them from infecting me with Italian herpes or that the doorknob was broken and wouldn’t turn to open the door to the bathroom or that, when I panicked because I couldn’t get to the toilet when the food poisoning struck in the middle of the night, I ran naked into the hallway to eject the aforementioned two liters of wine plus about a cubic meter of spaghetti noodles across the white tile floor like a curling stone gliding over ice.

The night desk guy told me in broken English that he watched the whole thing on video and thought I was throwing up blood because I was possessed by a demon. He was wearing a rosary from the St. Peter’s gift shop. I wasn’t listening to him, not that closely, really, because I was still wearing the briefs into which I had heftily sharted in observation of Newton’s Third Law mandating an equal and opposite reaction to my projectile vomitus. My briefs smelled of the devil’s handiwork, not spiritual cleansing.
The Pope made me wear pants. And there were consequences.

Posted on May 30, 2014, in Uncategorized. Bookmark the permalink. Leave a comment.

← The Dream Trip
Did someone say zombies? →